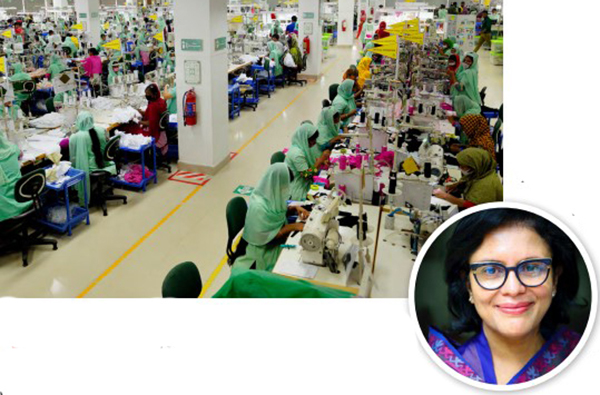 A success story: The Bangladeshi garment sector has made remarkable progress in recent years

While Bangladesh will celebrate its 50th year of Independence on 26 March 2021, the country, despite all sorts of challenges and adversities, has shown a great deal of resilience and grit, emerging as the second largest exporter of ready-made garments (RM G) to the world, after China. Bangladesh’s market share in global RM G trading is 6.5 per cent.

The last couple of decades have been quite eventful for this country, as it has significantly ramped up its capacity and capability in RM G manufacturing.  Bangladesh has also positioned itself as a reliable supplier in the global market. Over the last two decades or so, RM G exports from the country have grown at a CA GR of 14.8 per cent, reaching $34.2 billion in 2018-19 (July 2018-June 2019) and contributing over 84 per cent to the country’s total exports. In 2019-20, however, due to the Covid-related market slowdown, exports were hit badly, declining to around $28 billion.  The Bangladesh economy remains highly dependent on the RM G industry for manufacturing, employment, foreign reserves and women empowerment.

The industry contributes 11.2 per cent to the country’s GDP. The 4,600-plus RMG units constitute the largest industrial sector in the country, contributing 36 per cent of manufacturing employment and engaging 4.1 million workers.

“The Bangladesh government has been quite proactive in supporting the RM G industry in the country,” says Rubana Huq, president, Bangladesh Garment Manufacturers & Exporters Association (BGMEA). “Backed by progressive policy initiatives, we have created a favourable environment for the RM G sector, where private entrepreneurs have played a big role in building up a strong ecosystem. Currently, we are looking to consolidate our position further and add more value to our offering by getting into high-value garments.”

Recently, during the initial months of Covid restrictions, when the country’s RM G exports were hit badly due to the closure of garment units, as also the cancellation of orders by buyers in the global market, the Bangladeshi government promptly announced a stimulus package of about Tk105 billion for reviving the economy, of which about Tk50 billion was allocated to bail out the export-oriented RM G industry. As the garment units struggled to pay wages to their workers during the recent challenging period, the package ensured that workers would get wages and allowances and stay afloat. Besides, the size of the Export Development Fund was increased from $3.5 billion to $5 billion, which provided short-term facilities for importing raw materials for export-oriented industries. Out of this package, the central bank of Bangladesh instituted a $600-million preshipment credit refinance scheme for RM G and other export-oriented industries.

“Our government’s timely interventions have paid rich dividends in the past,” adds Huq. “This time round also, the stimulus package was a major support to the RM G industry during Covid, helping it tide over challenges on the macro and micro fronts. In the short term, as we have been able to overcome the difficult situation, in the medium term, we as an industry are also closely observing the developments happening in our primary market, the EU, in this Covid scenario. In the long run, we want to not only sustain the growth achieved by the industry, but also look forward to graduate to become a supplier, which will enable us to have a much better say in the market.” Huq is also the Managing Director, Mohammadi group, Bangladesh -- a family business conglomerate, whose journey began exporting readymade garments and has since diversified into software, digital distribution, real estate and power generation. The group’s latest venture is a media enterprise – the launch of a television channel, Nagorik. Huq had also featured in BBC’s 100 Women of 2020. And most recently, she has been elected the suppliers’ representative at the Steering Committee of the Fashion Charter for Climate Action for 2021-22 for her continuous support and commitment to climate action.

No doubt, Bangladesh has scripted an inspiring story for itself in the garment sector,” acknowledges Rahul Mehta, chief mentor & past president, Clothing Manufacturers’ Association of India (CMAI ). “Today it has emerged as the second largest supplier of RM G to the global market. Despite its dutyfree access to countries in the EU and its LDC status, the industry over there has done remarkably well to convert these benefits to its favour and build up a strong manufacturing base for garments. The local government has also been quite proactive and supportive in offering a favourable environment that has gone a long way in nurturing the local industry. In fact, Bangladesh has set a good precedent to be emulated by others.”

Bangladesh enjoys preferential access in the EU under the ‘Everything but Arms’ (EBA), which has helped it in gaining a commendable market share in the EU. Today, with a share of about 61 per cent, the EU is the largest market for Bangladesh textiles products, followed by the US, with 15 per cent share. A detailed analysis of Bangladesh exports to key markets over the past 10 years indicate that, other than the EU and the US, exports to Japan and Russia too have been increasing and are growing at a CA GR of 36 per cent and 28 per cent, respectively.

Experts believe it is not only the duty-free access that has helped Bangladesh achieve this performance, even as countries like India, which has a traditional textile base, with a presence across the entire value chain of the textile and garment manufacturing, has languished badly. Till even 15 years ago, at about $9 billion, both countries were on a par with each other. But, since then, while Indian RMG exports stagnated at about $16 billion in 2019, Bangladesh has grown phenomenally by almost four times.

Experts concede that, while Bangladesh, backed by flexible labour laws, has built large garment units in recent years and thus enjoys a significant degree of scale, more than 80 per cent of units in India are still in the SME/unorganised sector, due to rigid labour laws and other challenges.  Thus, it has not only failed to possess the inherent strengths of manufacturing, but is also not able to generate favourable treatment from large foreign buyers. Rigid laws have prevented India from functioning flexibly in a seasonal industry. India has only three or four garment makers, with a turnover in excess of $100 million. Hence, the turnaround time of Indian firms from order to delivery is 63 days. In Bangladesh, the turnaround time is far less – about 50 days. Also, it takes only one day for a consignment to reach a port in Bangladesh.  In India, it can take as many as 10 days for a consignment to reach a port. All such factors are barriers to creating scale.

“Bangladesh has made tremendous progress in RM G exports,” says Sanjay Jain, chairman, ICC National Committee on Textiles & immediate past chairman, Confederation of Indian Textile Industry. “It has aptly shown how the right policy framework and its execution can transform an industry and help contribute significantly to the overall economy. The Bangladesh government has been quite proactive in putting up favourable policies and resolving the issues arising from time to time.” While the Bangladesh RM G sector has always been under scrutiny, workplace safety in the industry has improved in recent years. Following the fire incident at Tazreen Fashions in 2012 and the Rana Plaza Building collapse in 2013, the government, with the assistance of the European and North American retailers’ initiatives (known as Accord and Alliance respectively), have implemented massive remediation programmes. Overall, the remediation efforts have enhanced workplace safety significantly in RM G factories.

The local industry has also worked on creating a favourable carbon footprint for itself. As per BGMEA, Bangladesh has 91 Leadership in Energy and Environmental Design (LEED) certified green garment factories, which is the highest in the world. The country is also home to the highest number of platinum-rated garment factories globally. As many as 25 Bangladeshi factories have achieved the highest certificate provided by the US Green Building Council (USGBC) with six out of the top 10 LEED certified factories worldwide situated there. About 500 more RM G factories have been registered with the USGBC for LEED certification.