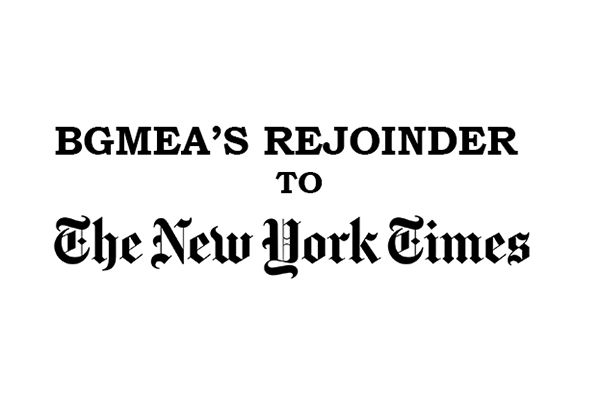 A report headlined "Dozens Die as Another Factory Fire Strikes Bangladesh" published in the New York Times on July 9, 2021 has drawn our attention. We are extremely disappointed by the spurious claims made in the report that unjustifiably attempted to malign the apparel industry of Bangladesh.

The fire incident that occurred on July 9 in Narayanganj was not in any readymade garment (RMG) factory. It is an extremely unfortunate event and happened in an Agro-food processing factory.

The report maliciously linked this tragic incident to the RMG industry and falsely mentioned that ‘despite a public outcry after the tragedies, conditions in many factories have remained largely unchanged, and fires are common’. This is completely untrue and gives false impression about the RMG industry of Bangladesh because such is not the case here in the industry.

The readymade garment industry in Bangladesh has made unprecedented efforts and progress in workplace safety, particularly in fire, electrical and structural integrity, over the past eight years following two tragic accidents. The safety transformation was done through unprecedented collaboration of the global brands and retailers, manufacturers, government, ILO, development partners, and local and global unions.

The safety initiatives namely National Initiative supported by buyers led private initiatives- Alliance and Accord - inspected all export-oriented garment factories in Bangladesh and identified safety hazards, which were fixed by the factories. The industry spent millions of dollars largely without any external support to carry out the remediation activities. Besides, inspection and remediation reports of all factories were made publicly accessible through websites, which made the process uniquely transparent and credible. To keep this momentum of workplace safety, the RMG Sustainability Council (RSC) has been formed to build local capacity as a national safety monitoring regime, involving equal number of representatives from industry bodies, brands and unions in its governance.

Over these years massive training, awareness and creation building initiatives were put in place to create the culture of safety, which covered fire safety drills and other occupational safety and health issues, as well as social dialogue and industrial relations. Each factory has mandatory safety committee created from certified safety trained workers, and each department and floors of every factory have to have at least 1 or more workers from Safety Committee present in each designated areas. Also the Labor Law has been amended making it mandatory to have this safety committee in every factory to engage and empower workers.

A recent report by the McKinsey&Co. mentions Bangladesh’s RMG industry as “a frontrunner in transparency regarding factory safety and value-chain responsibility, thanks to initiatives launched in the aftermath of the disasters”.

Today the garment factories are not only safer, but also has become a model industry in the world in terms of environmental sustainability. Bangladesh is the home of the highest number of green garment factories in the world with 144 factories certified as LEED (Leadership in Energy and Environmental Design), by US Green Building Council (USGBC). Among them 41 are LEED platinum-rated and 89 are LEED gold-rated units. 500 more factories are in the pipeline for certification.

While the industry has demonstrated its commitment and dedication toward sustainability, such reporting hinders our efforts and undermines the progress. It cannot be denied that the way safety has been ensured in the garment industry, it couldn’t be done in other sectors in the same way. The garment industry is not responsible for other sectors, it can only be a role model for others. Citing RMG as the only example is mischievous, while we have tragedies in other industries and across borders, though unfortunately and painful, to be used as examples.

We expect a decent and balanced view to all sectors and industries without any bias in journalism, because an unjustifiable narrative hurt the image of the RMG industry which has been the source of livelihoods for millions.