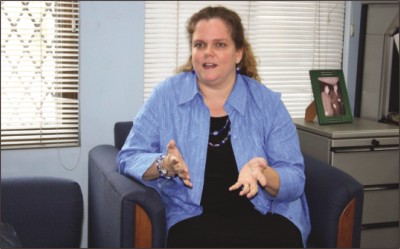 Bangladesh needs forum with US

Bangladesh needs forum with US

US Embassy official suggests in an interview with The Daily Star

Bangladesh should move to set up a formal bilateral forum with the US to discuss a range of issues, including trade disputes and duty and quota free market access, said a US Embassy official.

Bangladesh is losing chances to hold regular talks with high-level US government officials due to a lack of a formal bilateral forum, Heather Variava, first secretary (economic and political affairs) for the US Embassy, told The Daily Star in an interview.

“Bangladesh could have bargained with its US counterpart in favour of its trade interests, trade disputes, duty and quota free market access facilities and attract investors, under the forum,” she says.

The senior US official who has been residing in Bangladesh for the last two and a half years says the country has to communicate on an ad-hoc basis in the absence of such a forum.

Variava said the US government placed the text for signing a Trade and Investment Framework Agreement (TIFA) in April 2008, but the Bangladesh government has not made an official reply as yet on the proposal.

She says if Bangladesh does not want to sign a TIFA agreement, it could form the forum as an alternative.

“Such a forum will guarantee that Bangladesh will have an annual high-level meeting with US officials. Its formal process really obligates both sides to come together."

Explaining the characteristics of the forum, Variava says the forum does not have a large number of rules.

“Both the government and the private sector members can meet together or separately whenever and discuss whatever they want to,” she says.

On the recent disputes over the export of sleeping bags from Bangladesh, she informs that the US government is still considering the request placed by the local producers.

The export of sleeping bags made in Bangladesh witnessed a surge in the US market recently and local manufacturers requested the United States Trade Representative (USTR) to impose a restriction or cancel the generalised system of preferences (GSP) for the product.

Variava says Bangladesh needs to represent both the government and producers to the USTR and US International Trade Centre to discuss the issue.

She says disputes like these could have been settled if the government had a formal forum in place.

Variava says the bottom line is that the US government is interested in building a trade and investment relationship, and one way to do so is by building a regular forum for discussion.

On falling trade between Bangladesh and the US recently, the official says Bangladesh witnessed a slide mainly because of global recession in the last couple of years.

“Bangladesh should not worry too much about that. The small decline was a reflection of the global economic situation,” she adds.

Forecasting a great trade future, Variava says the country's prospect for the coming years is excellent. “Garment exports are mostly increasing and woven garments are doing fine as well. We certainly are seeing that more and more business is coming to Bangladesh.”

She suggests Bangladesh diversify its export basket to maintain shipment growth in the coming years.

Variava says the country is facing hurdles in receiving foreign investment because of a shortage of gas and power.

“If the gas, power and infrastructure challenges are overcome, Bangladesh could be a lucrative investment destination for foreign investors,” the official adds.

Asked about the labour standards at the Bangladesh export oriented factories, Variava says the labour issue always receives high priority from the US government.

She suggests maintaining full compliance with labour standards, as internationally reputed brands, such as Wal-Mart, are increasing their outsourcing from Bangladesh.

Variava says US customers are savvy about labour standards and if they get information on any violation, they may refuse to consume products from those destinations.

Many US agencies are providing support to Bangladeshi manufacturers and export processors in the shrimp and footwear sectors to maintain their high standards and contain the US market.

On investment, the US official says new companies like Boeing and Caterpillar are coming to Bangladesh.